Yesterday, HSP received its historical marker!  This commemorative blue and gold sign sits just a few yards up from the southwest corner of 13th and Locust streets.  This year, HSP is celebrating our building’s 100th anniversary.  You can learn more about the history of our building in our online exhibit and past blog post; and be sure to check out photos from yesterday’s dedication on our facebook page.

2010 will mark the 100th anniversary of the current home of the Historical Society of Pennsylvania, located at 13th and Locust streets. HSP circa 1940. The facade looks almost exactly the same today.

It is a milestone for a building that most people walk by without giving a second glance.   Just how did HSP come to live at this site?  Here’s a quick rundown of our pre-Locust Street history.

HSP was founded in 1824 by William Rawle Jr., Roberts Vaux, Thomas I. Wharton, and others “for the purpose of elucidating the history of the State.”  Early meetings were held in various locales, including Thomas Wharton’s house; but by 1826, the Society was housed in rooms at the American Philosophical Society.  In 1844, the Society moved to 115 South Sixth Street, into a building then owned by the Pennsylvania Life Insurance Company.

Just a few years later, in 1847, the Society moved a block down Sixth Street to #219, into rented space in the newly-built home of the Athenaeum.  The Society lived here for 25 years. 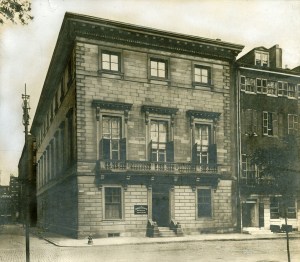 The Athenaeum of Philadelphia, circa 1940

In 1872, the Society moved to the “Picture Building,” overlooking the grounds of Pennsylvania Hospital, where it remained for about another 12 years.

The "Picture Building" at the Pennsylvania Hospital circa 1940

A large mansion at the corner of 13th and Locust streets once owned by General Robert Patterson of the Mexican War came up for sale in 1883, and the Society jumped on the opportunity to buy the building for its ever-expanding collections.  Located near several influential institutions that marked the westward expansion of Philadelphia in the 1800s, such  as City Hall, the Academy of Music, the Union League, and the Library Company of Philadelphia, the Society purchased the well-placed mansion and an adjoining lot in 1884.

Watercolor of the Patterson Mansion by David J. Kennedy, 1836

In the Patterson Mansion, the Society rapidly grew, both in terms of membership and collections.  As more and more “valuable treasures” entered the building, concerns grew over the safety of such materials in a building that was not fireproof.  Hence, in 1901, the Society announced a capital campaign for a new fireproof building.  Construction began in 1904 and was completed in 1907.  The building was formally opened to the public in 1910. 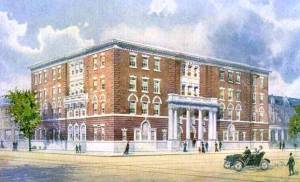 For further information, check out these two books, both of which are in HSP’s library:  Hampton J. Carson’s History of the Historical Society of Pennsylvania (1940) and Sally F. Griffith’s Serving History in a Changing World (1999).