When you visit the Historical Society of Pennsylvania’s webpage and read the description of what we do, you’ll find a reference to additions to our collection of documents acquired in 2002 from The Balch Institute for Ethnic Studies. Although HSP has excelled in keeping and providing access to valuable documents about American colonial history, we do hold collections pertaining to Latino (or Hispanics) groups that have settled in Pennsylvania. The additions from The Balch Institute for Ethnic Studies add even more records to HSP’s holdings related to the Latino experience in Pennsylvania, particularly that of organizations and individuals established in the Philadelphia area.

As a guide to researchers interested in subjects connected to Latinos in United States, or collections with papers produced by persons associated with major events in Latin America, we offer an inventory (by no means exhaustive) of what we at HSP have.

The John Rutter Brooke papers (Collection 0078) contain, among other things, documents about his roles as an important military commander during the Hispanic-American War, and as military governor of Puerto Rico and Cuba. The Joseph Sill Clark papers (Collection 1958) feature documents related to the 1965 US invasion and occupation of the Dominican Republic, and memorandums pertaining to Argentina’s 1960’s political situation. Sill Clark was mayor of Philadelphia and served as United States senator from Pennsylvania. The Adolfo Fernández Cavada diary (Collection Am .6956) was written while serving as Captain with the Pennsylvania Volunteers, 23rd Regiment; and includes a detailed personal account of the Battle of Gettysburg. Fernandez Cavada was one of three brothers born in Cienfuegos, Cuba who later joined the Union Army. Puerto Rico legal and government papers (Collection 0518) is an assortment of licenses to masters of vessels, passports, copies of government rules, regulations regarding ports, and similar legal documents issued by the Puerto Rican government.

Among the collections describing the Latino experience in Philadelphia we can mention the Nelson A. Diaz papers (Collection 3079), featuring documents produced while working as a Philadelphia attorney who served on the Philadelphia County Court of Common Pleas and as general counsel for the federal Department of Housing and Urban Development. We also have the records for the Spanish Merchants Association of Philadelphia (MSS114), founded in 1970 by Puerto Rican businessmen in Philadelphia to distribute Minority Business Development Agency funds in the Latino community; the Puerto Rican Week Festival records (MSS119), produced by the Council of Spanish Speaking Organizations of Philadelphia; records for the Pennsylvania branch of Aspira, Inc. (MSS148); records for the Philadelphia Center of The League of United Latin American Citizens (Collection MSS149), founded in Texas as an advocacy group to increase educational opportunities for Hispanic Americans; papers for the Post #840 of the American Legion in Philadelphia (MSS165), whose membership was primarily Puerto Rican; The Latino Project records (MSS117), headed by attorney Luis P. Diaz, provided legal assistance and representation to Spanish-speaking groups and interests in Greater Philadelphia area; the Hispanic Federation for Social and Economic Development records (MSS116), non-profit organization serving Puerto Ricans and Latinos in Philadelphia; records for Fifth Street Merchants Association (MSS118), formed in 1975 to represent the interests of merchants within the so-called “Golden Block,” the Fifth Street corridor bordered by Lehigh Avenue and Allegheny Avenue in North Philadelphia; and the Council of Spanish Speaking Organizations of Philadelphia records (MSS120), organized in 1962 as a liaison between the Spanish-speaking and non-Latino communities, and intended to coordinate existing Spanish organizations and to create new programs and activities for their constituents.

It’s worth pointing out that the Historical Society of Pennsylvania holds thousands of documents on the history of United Sates in general, and on Pennsylvania in particular. Hence, this is only a small sample of collections that may contain materials about Latinos in United States. 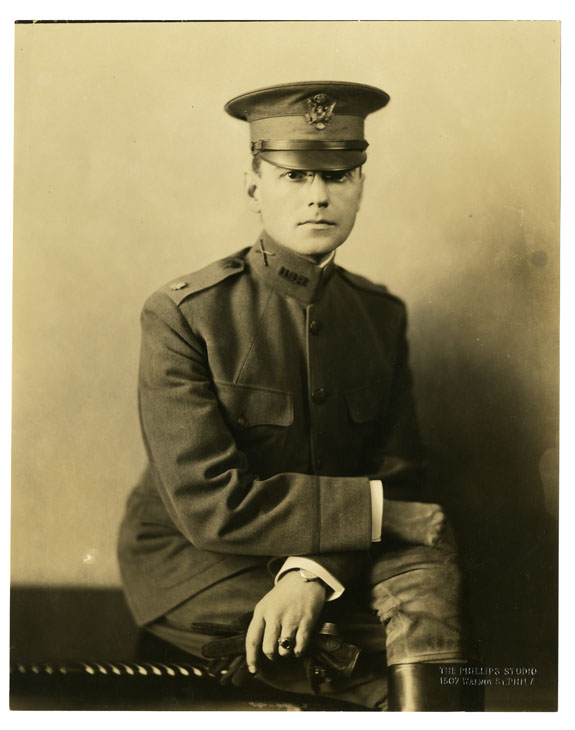 Alfred Reginald Allen (1876-1918) was a prominent Philadelphia neurologist and neurosurgeon. He was also heavily involved in Philadelphia theater scene, writing numerous comic operas, and was a founding member of the Savoy Company. In 1915 he enlisted in the Army Reserves, eventually achieving the rank of Lieutenant Commander. In this letter written from training camp to his father, Rev. George Pomeroy Allen, Allen explains a little bit about why he left a successful life as a doctor to risk his life in a war unlike any seen before. 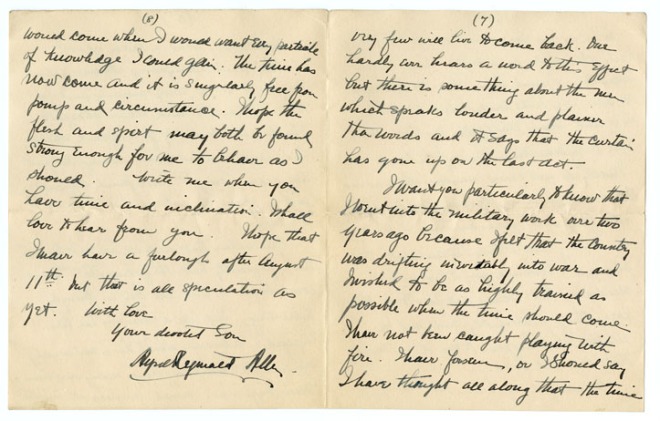 "...I felt that the country was drifting inevitably into war and I wished to be as highly trained as possible for when the time should come."

In the summer of 1918 Allen’s reserve unit was called into action. He was killed in action on September 30 in the Battle of Argonne. Here is the official telegram sent to Allen’s wife, Helen Warren Allen, informing her of her husband’s death. Note that the telegram is sent over a month after Allen was killed. I can only imagine the anguish that the Allen family, and indeed families all across the country, must have felt while waiting for official word about their loved ones. 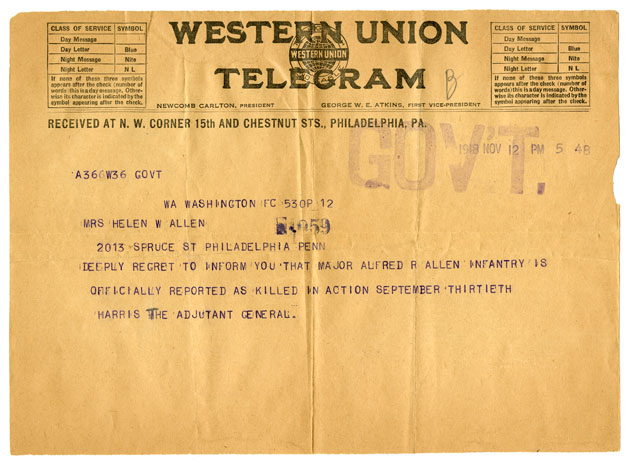 After Allen’s death many of his troops and colleagues sent letters of condolence to his family. Here is just one of those from an enlisted man under Allen’s command. 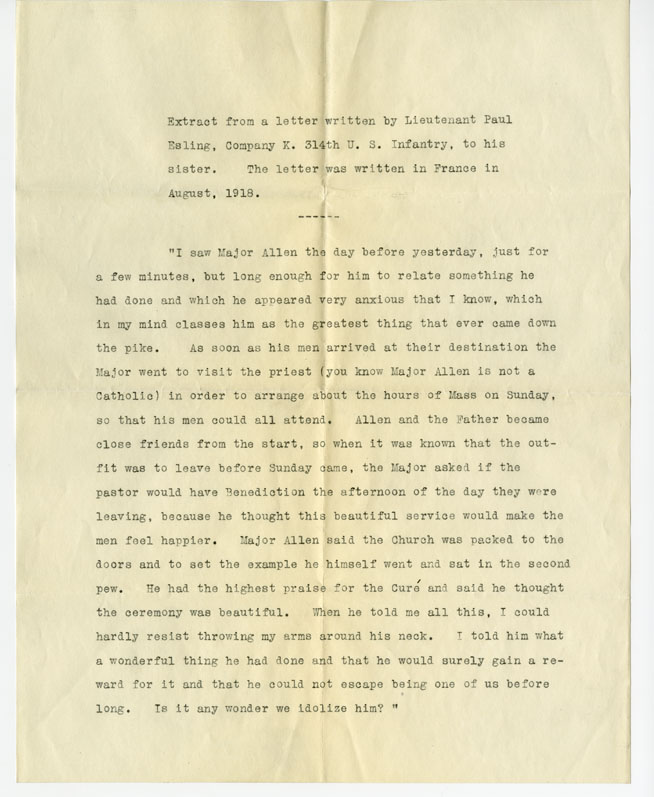 The Allen Family Papers is a rich collection with many stories to tell. This particular facet is especially significant as we celebrate Veteran’s Day.

HSP houses many other collections with World War I-related content.  Here are a few highlights: 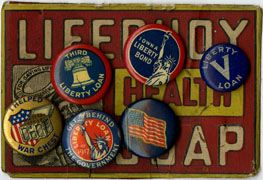 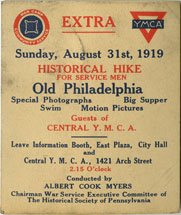 These are just a few of the collections illuminating World War I’s impact at home and abroad.

This week I spent some time working on the Joshua Humphreys papers (Collection 306). Born in Haverford, Pa. in 1751, Humphreys would go on to be the nation’s foremost naval architect in the post-Revolutionary era. In 1776 Humphreys was chosen by the Continental Congress to design the retrofitting of eight merchant vessels into battle-worthy frigates. These eight ships were the first military vessels of the United States. After the war, Humphreys pressed for an expanded fleet of ships that would be capable of not just defending the coastline, but also capable of going on the offensive in the open seas. In 1797, the frigate United States was launched and five more ships soon followed. These ships were the first all new ships designed for the American Navy and formed the backbone of the fleet during the War of 1812. The other ships were the President, Chesapeake, Constellation, Congress, and the Constitution – famously known as “Old Ironsides” and the oldest commissioned U.S. naval vessel still afloat. Several of the innovations Humphreys introduced on these ships, such as a knife-like keel to cut through the water and a bulging hull for added steadiness, were design elements used on ships well into the steam era. Humphreys managed to irritate several Secretaries of War and when Thomas Jefferson, who was opposed to the idea of an offensive Navy, was elected, Humphreys was “asked” to retire in 1803. His son Samuel however was also a naval architect, and Humphreys managed to stay in the business through his son, albeit in a less official capacity. 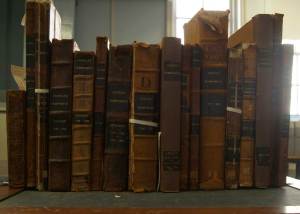 The collection consists of Humphreys’ daybooks, ledger books, and letter books. Taking a look at these, I suddenly became very grateful for all the computer accounting and financial management software out there (I myself swear by Quicken). In the late 1700’s, managing a business meant one had to be very methodical to keep all these records by hand. 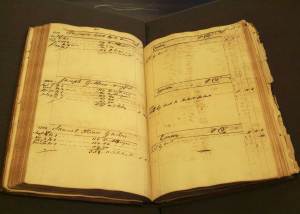 Though most of the collection consists of financial record keeping, there were also some instructions on how to build ships and some hand drawn diagrams too. 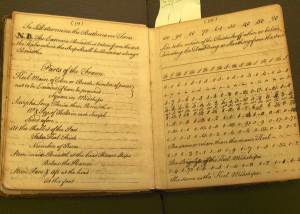 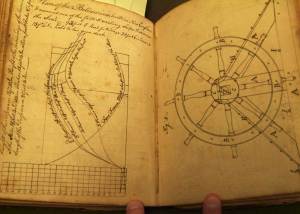 Also in this collection was the daybook of Charles Humphreys, Joshua’s brother and a member of the First Continental Congress. When I opened this book, many small scraps of paper literally came bursting out. It seems Charles did a lot of his record keeping on small scraps of paper, sometimes tearing personal letters up and using the backs to do some quick math. Perhaps he was the less organized of the two brothers.

Finally, while doing some background research on the web, I came across this most interesting site, WarDepartmentPapers.org. It’s an interesting project with lots of fascinating documents. Anyone interested in early American military history must check it out. 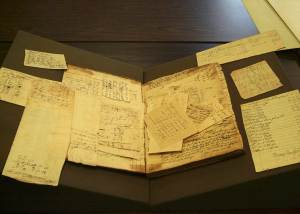