HSP has a large collection or programs, playbills, and other ephemera from Philadelphia’s Academy of Music (once called the American Academy of Music), dating from its beginnings in the late 1850s to the late 20th century.  The collection was recently adopted and is my current processing project.  Though I’ve barely scratched the surface (having just completed rehousing 13 of 157 boxes), the collection is already proving to be a joy–it presents a veritable history of performing arts and artists at the academy, as well as a plethora of creative advertisements, typefaces, and graphic designs of bygone eras.

Hidden among the many playbills and programs is a wonderfully artistic array of dance cards, programs, and other advertisements for meetings, benefits, and balls held at the academy by numerous local clubs and associations. 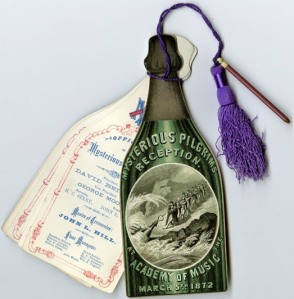 Though the academy was originally designed as an opera house, it became a hub for all forms of entertainment from theatre to ballet to vaudeville.

Academy of Music program (circa 1880) 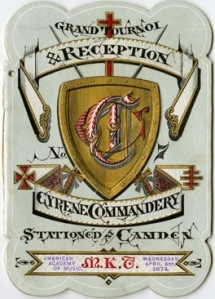 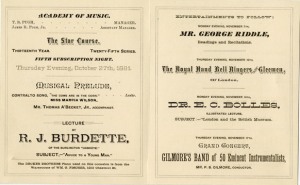 Today, the Academy of Music, along with the Kimmel Center for the Performing Arts,  is home to the Philadelphia Orchestra, Opera Company of Philadelphia, Pennsylvania Ballet, the Chamber Orchestra of Philadelphia, American Theater Arts for Youth, PHILADANCO, Philadelphia Chamber Music Society, and Peter Nero and the Philly Pops®.

No doubt that further processing will reveal more surprises!  Both processing and the collection’s finding aid are scheduled to be completed later this summer.

Last week I began to create a finding aid for the Allen Family Papers. From what I can tell so far, the majority of the collection seems to be Alfred Reginald Allen Sr.’s (1876-1918) correspondences with his father, son, wife, and other family members. Leslie Hunt, a former archivist at HSP, had painstakingly inventoried some of this collection back in 2001. Given that and considering that my processing of the collection would be an experiment in minimal processing (see Mark A.Greene and Dennis Meissner’s “More Product, Less Process” for more), I did not have the chance to really dig into this collection. However, what I could glean from this collection was an interesting story about the father and son relationships within this family.

Alfred Reginald Allen Sr. was a neurologist and neurosurgeon who earned his degree from the University of Pennsylvania. Allen also had a serious interest in musical theater. In his early adult life, he wrote numerous songs, some published, some not. He was also a founding member of the Savoy Company, a theater group that performed the works of Gilbert & Sullivan, which still exists today. However, Allen seems to have abandoned the theater world around 1907. His father, Rev. George Pomeroy Allen (1845-?) apparently exerted pressure on Alfred to focus exclusively on his medical pursuits. The previous archivist noted that this might have been because Alfred’s younger siblings, John Ernest and Nancy, were “free spirits” that caused the family much grief and that for this reason Rev. Allen pressured Alfred to be successful.

Before abandoning his theatrical pursuits entirely however, Alfred seemed to find a way to combine the theater and medical worlds. Here is a program for a medical-themed comic musical entitled “Evelyn and Harry” that Alfred wrote, scored, and acted in. “The American Neurological Association Comic Opera Company” presented the musical – perhaps this was a conglomerate of like-minded neurosurgeons?

One thing that from the musical that got a laugh out us was the number titled “I Want Your Brain and Spinal Cord.” Luckily, the collection contained the sheet music for this song.

In 1915 Alfred joined a reserve unit of the United States Army. In the summer of 1918 his reserve unit was called into action. Alfred wrote numerous letters to family first detailing his experiences at training camp, and then his experiences in the war-zone in France. From France he wrote a very sentimental letter to his son, Alfred Jr. (1905-1988), called Reggie in the family, in which he (perhaps realizing that there was a good chance he would not survive the war) instructs Reggie on how to be a man and also to follow whatever endeavors he wished. Reggie initially did not respond to this letter, and Alfred Sr. wrote a few letters to his wife asking why. Reggie, who was about 13 at this time, finally wrote back to his father explaining that he did not respond because the letter made him “feel so badly that I tried to forget it all.” 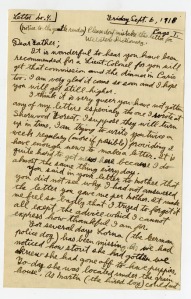 Sadly, Alfred Sr. never received this letter – he was killed in action in September 1918 during the Battle of Argonne. I can only imagine what young Alfred Jr. must have felt when this letter was returned to him marked “Killed in Action.” 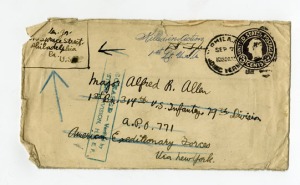 This is another one of those interesting little stories that the collections at HSP have to tell. Uncovering these stories has been truly the most fascinating aspect of archival work for me. I hope to find (and share) many more!

This summer, I spent some time going through the Edwin Forrest Home Records to identify items for digitization.  This collection documents the Home, its operation, its residents, and its dissolution. The Edwin Forrest Home was founded after the actor Edwin Forrest’s death to provide a place where retired actors could live comfortably and be cared for during the last years of their lives.  Residents were required to have been in the theatre for a proscribed period of time, and needed recommendations to be accepted to live in the Home.  Upon entry, the residents turned their incomes over to the Home, which agreed to feed, clothe, and pay for medical care for each resident for the duration of their stay at the Home.

The Home’s first location was Forrest’s country estate “Springbrook” in the Holmesburg section of Philadelphia. 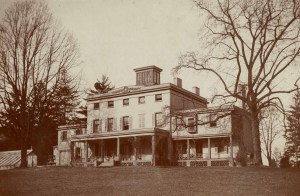 In the early years of the twentieth century, it became clear that this home was no longer sufficient to serve the needs of the residents.  Among other limitations, Springbrook only had one toilet.  The board of the Edwin Forrest Home contracted the construction of a new facility, which would have modern conveniences and provide guests with everything they needed to fully enjoy their retirement.  This new Home at 4849 Parkside Avenue opened in 1928. 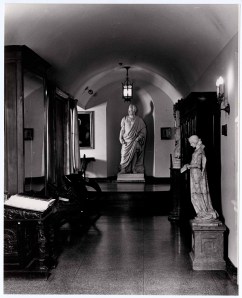 Some of the most interesting records in the collection are the “Guest Books,” which are essentially small files on the residents of the Home.  In some cases, the guest books are simple trascriptions of guests’ names and basic information.

In other cases, these guest books are more elaborate affairs, including photographs, newspaper clippings, obituaries, details about the actors, and contact information for friends and relatives. 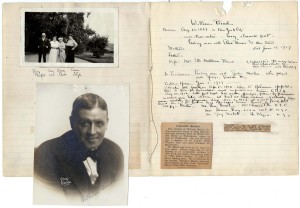 Some of the correspondence in the collection illustrates the “dramas” that sometimes ensued in this home, but primarily the residents’ letters express their sincere appreciation for the care they received at the Edwin Forrest Home.  When the Home closed in 1986, it merged with the Lillian Booth Actors’ Home of the Actors’ Fund of America in Englewood, New Jersey.  This home is still in operation.