While working with the Allen Family Papers I came across some travel journals with ephemera from the trips (mostly postcards) laid in. The journals span 1909 to 1934 and cover the family’s trips to Europe (with one exception of a trip to California via the Panama Canal).

The journals presented a somewhat perplexing question. The earlier journals were written by Alfred Reginald Allen Sr. (1876-1918) while the later ones were written by Alfred Reginald “Reggie” Allen Jr. (1905-1988). What’s odd is that even though different people wrote them at different times, the journals all look physically the same; a small green canvas binder with three-holed notebook paper inside. I had to wonder how this could be. I figured that Allen Sr. purchased several binders at once and that Reggie continued to use them as travel journals after his father’s death. Another possibility is that Reggie put his father’s writings into the same type of binders he was using sometime after his father’s death. If I had to guess, I would say that the former is probably the case since the paper inside is such a rare size to find.

Since these journals were written well before the time that trans-Atlantic air travel came into being, the first and last portions of the journals always document the trip across the Atlantic and back via ocean liner. Being an avid ocean liner buff I found these portions, particularly the related ocean liner ephemera included, to be the most interesting.

At a time when a trip to Europe meant spending about a week at sea ocean liners had to be more than basic transport but more akin to a floating city. The various companies (notably the German and British lines) competed to outdo each other in size, speed and grandeur to lure passengers to book passages on their ships. Essentially they wanted to make the ship itself a destination. With that in mind, traveling during the heyday of the ocean line gives truth to the old adage: “Getting there is half the fun.”

Reggie and sister Helen having fun during a voyage in 1913.

Passenger lists on the best ships tended to read like a veritable Who’s Who of American and European society. The French line Compagnie Générale Transatlantique went so far as to print lists of passengers for the passengers. Maybe this was that well to do people could plan whom they would be dining with aboard the ship (getting a “good” table was of the utmost importance). 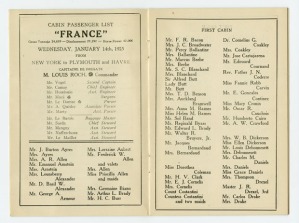 Although commercial air travel was available starting in the 1920’s it did not really take off (no pun intended) until the 1950’s. Commercial jets such as the DeHavilland Comet and the Boeing 707 provided passengers with a much faster and cheaper way of crossing the Atlantic. By the 1960’s the age of the ocean liner was all but over. But in the first decades of the twentieth century, air travel was more of a novelty as this brochure from the London Aerodrome (dated 1913) that was with the journals can attest to.

For a fee one could be flown around the London Aerodrome.

Surely steam-powered travel was not in Peter Gabriel’s mind when he wrote his 1992 song Steam. But cutting edge travelers of 1869 may have been eager to step into (or rather, sit behind) the cloud of steam produced by the one, the only…”The Wonderful Steam Man!”

While going through a few boxes of uncatalogued graphics, I came across these interesting clippings about and an 1869 flyer advertising a revolutionary new way to get from point A to point B.

This particular contraption was invented by P. Dederick and I. Grass of Newark, New Jersey.  “Steam Man” was a steam-powered carriage led by a human-shaped machine.  Its body held a boiler that was connected to a piston and series of levers and cranks.  When enough steam was generated, the piston activated the attached mechanisms and the machine walked forward. 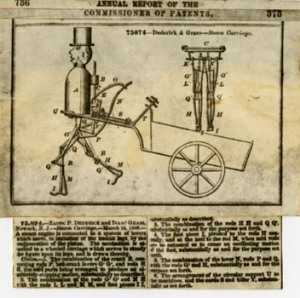 Steam-powered travel was hardly a new concept in 1869.  Robert Fulton, a native of Lancaster County, Pennsylvania, is widely recognized as the inventor of the first commercially-viable steamboat in America in the early 1800s.  However, decades earlier, several inventors, including Virginian John Rumsey and John Fitch, who born in Connecticut but eventually settled in Bucks County, Pennsylvania, began working on their own steamboat designs.  Fitch completed his design in 1787, and his steamboat (pictured below) was among the first to successfully navigate the Delaware River between Philadelphia and Burlington, New Jersey.  Fitch and Rumsey battled over patents for their boats; and Fitch eventually won a patent just for his design.  Despite his success, Fitch didn’t possess enough money to fund the construction of his steamboats.

Fulton’s success in the steamboat business no doubt inspired others to invent ways to  expedite travel.  The “Steam Man” was just one example that never quite took off; even though, as you see from this clipping below, the idea stuck around into the decade that saw the invention of the automobile.

HSP has several collections relating to people and their inventions, including the John Fitch papers (#208), the Mary Hallock Greenewalt papers (#867), the Penrose Robinson Hoopes papers (LCP), and the Christian F. Gobrecht papers (#241)  For a interesting look into the history of machines like Steam Man, check out these sites: http://www.bigredhair.com/robots/index.html and http://cyberneticzoo.com/?page_id=164.