This past weekend I attended a Guild of Bookworkers, Delaware Chapter workshop taught by Pamela Spitzmueller.  Pam is the first James W. Needham Chief Conservator for Special Collections in the University Library and the College Library at Harvard University. The workshop was to inform us about considerations that must be taken into account with folded items within an atlas structure. This workshop was important for us, not only because we have so many maps in book as well as atlases,  but also for all of the genealogical charts!

Each participant in the GBW workshop completed a 3×5 sample book of different kinds of folds as well as several models of other books.

The side cut fold: 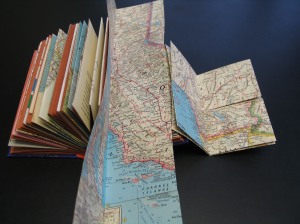 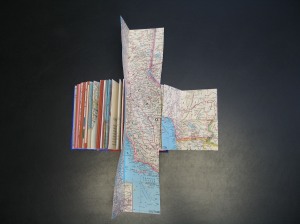 map which unfolds completely outside of the book allowing for the rest of the book to be read with the map unfolded for reference: 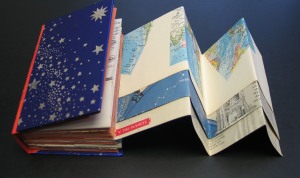 and the Chinese Road Atlas: 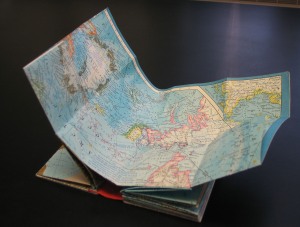 The workshop was great for bringing awareness to what can go wrong when maps are folded into books. When I got back on Monday I was excited to pull some of our older atlases and take a look at them with a fresh eye.

One of my favorites is this “Atlas”  presented to John Hancock, Esq. Yes, THE John Hancock.

This is a large volume with maps showing the coastline from Maine to Florida. It gives information about how to avoid the gulf stream as well as some of the more treacherous shoals. The book is made up of the maps which have been printed on several different sizes of paper.  Some of them fold out, some do not. A label on the front says 1780.

Next I looked at “Europe Divided after D’Annville” 1795. This atlas had a lot of good packing and compensating material.  Much thought went into the construction by the binder. You can see all of the compensating material in this spine shot.  This was used to create enough room in the spine so that the folded maps – which are thicker than a single sheet of paper –  wouldn’t make the book splay open.  (the book was also “repaired” at some point and you can see the new material under the spine)

Inside the book are some fantastic engravings. This map of Minorca is beautifully designed. It includes a larger map in the upper left, a view of the harbor in the upper right, the actual island in the middle and two elevations of different cities in the bottom right and left.  This map is printed  on one sheet of paper which is folded in half and glued to a tab. The tab is what is sewn into the spine and binding of the book. 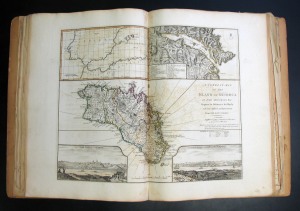 This large engraving of the southern half of Ireland has suffered from use in this perfect example of when things go wrong. Here is the image before it’s opened: 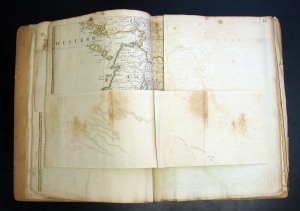 after opening: between Kerry and Waterford you should be able to read Cork. 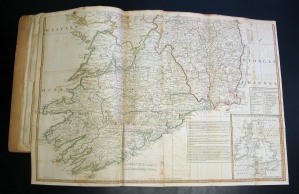 However, that area shows typical damage of a folded map tipped in too closely to the spine.

And finally another atlas, the Altas Geographicus Maior, 1759-1762,  is much thicker than either of the previous books. It contains maps which fold out in various directions. Including this one of the “Filipines”.

It is possible to see where the folding has damaged the book in both of these images.

This page also has a beautiful little compass rose. Here’s a detail for you:

This last book had another especially nice little image on the title page: 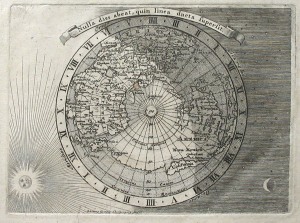 Last month, the Conservation Department welcomed Don Rash for a leather conservation workshop.  Rash is an esteemed fine binder and book artist who works out of Wyoming, PA.

Many of the library’s collections contain leather-bound volumes in various states of disrepair.  Some common examples are loose or detached covers and spines and red rot. Over the course of two days, Don shared with us a variety of treatment options for leather-bound books, conservation techniques, information about materials, and the history of many leather bindings.  Here are a handful of photos from the workshop – only a portion of topics covered in the workshop!

Detatched covers and partial spine - a great candidate for rebacking! 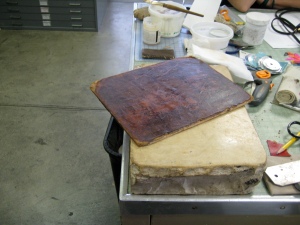 The detached cover of a book has been treated with a solution called Klucel-G that is applied to consolidate red rot leather.

A wheat paste poulitce is applied to remove the leather of a tightback spine.

The wheat paste softens the leather and the spine can be scraped clean.

New cords are pasted to the spine and sewn in place.

The new cords are fanned and pasted onto the boards (under lifted leather).

A paper spine is adhered and is being tied down until dry. 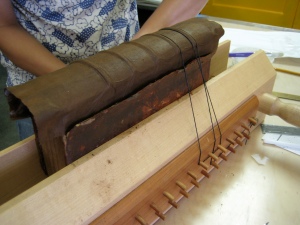 A matching japanese paper is wrapped around the spine.