On this day in 1890, hundreds of Lakota people were massacred at Wounded Knee creek in South Dakota by the 7th Cavalry of the United States military, commanded by General Miles and Brigadier General John Rutter Brooke, whose papers I recently processed.  Brooke is rarely associated with Wounded Knee in the way that General Miles is, but Brooke worked on the ground from the Pine Ridge Agency, and fed Miles much of the information upon which his policy was based. 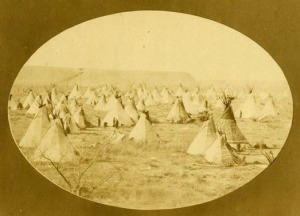 As I was processing the John Rutter Brooke papers (collection #78) a few months ago, I found that this collection contained an extremely detailed account of military plans and actions in relation to the Lakota/Dakota Sioux people who lived within the Pine Ridge and Standing Rock agencies in North and South Dakota.  I believe that these papers might lead to a more detailed understanding of the military campaigns in the Dakotas, and will certainly illuminate Brooke’s role in these maneuvers.

The communications about what Brooke dubbed the “Sioux Campaign” begin during the spring of 1890, in the form of telegrams between military commanders and operatives.  These telegrams trace the strategies developed by the U.S. military to deal with the “Ghost Dance religion,” which they perceived to be an escalation of  force on the reservations.  The United States government declared Lakota religious rituals illegal in 1883, and were putting pressure on the Lakota people to stop the dances.  Sitting Bull refused to cooperate with the military, and was finally murdered on December 15, 1890 during an attempt to coerce him into surrendering.  Sitting Bull’s murder was only the beginning of the military escalation in the Dakotas.  The weeks leading up to the Wounded Knee massacre saw a massive buildup of troops within the Pine Ridge agency as they attempted to capture Big Foot and his followers. 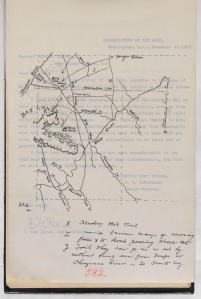 Accounts of the massacre at Wounded Knee offer various estimates about the number of Lakota people who were killed.  Because the bodies of Lakota people were pushed into mass graves, and many were hunted down as they ran away from the scene of the main gunfire, it is impossible to know the total number of people who lost their lives on December 29, 1890.  Telegrams leading up to the attack, however, suggest that the number of people camped by the creek may have been close to 400.  On December 28, 1890 at 9:35 pm, General Brooke wrote to the Assistant Adjutant General of the Department of the Platte, “Have a train at Rushville for four companies of Second Infantry and at Gordon cars for three hundred seventy Indians and their plunder.  This train must move in one body if it takes two engines.  The transportation which came from Omaha will go with the troops.  The train should be at Rushville on the thirty-first, ready to load and then pick up the Indians at Gordon.”  About an hour later, Brooke corrects his earlier telegram and requests that the train be at Rushville by the 30th.

Another telegram, this time from James W. Forsyth, Colonel of the 7th Cavalry, reports that conditions at Wounded Knee were “perfect.”  Forsyth continues, “[t]he Commanding General’s orders will be carried out in the morning, and as soon thereafter as possible I will report back to him with the battalion I brought out with me.  Rations for 400 Indians should be sent here to-morrow as early as possible with the forage train the General said he intended to send.”  It is unclear from the correspondence the nature of the orders Forsyth planned to carry out.

On December 29th, Forsyth reports to General Brooke, “On attempting to disarm the persons of the bucks they made a break, which resulted in a hot fight lasting from about 9.15 until about 9.45.  About 15 soldiers are wounded and a few killed.  The number of Indians killed and wounded not known, but believed to exceed the loss on our side.  The ones who escaped have fled up to the ravines to the west….  This dispach is indefinite, but is as accurate as I can give, as we are still engaged in cleaning out the adjacent ravines.” 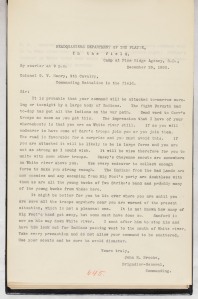 General Miles, late in the day on December 29, asks Brooke for more information about the report he received earlier in the day, “The report very indefinite.  Three hundred and seventy were reported last night.  What has become of the others?  This office will be open till late.  Do not understand that report.  What number are being brought in and what number have escaped?”

Brooke’s response is detailed:  “Forsyth says there were one hundred and six bucks and about two hundred and fifty squaws and children.  The bucks were accurately counted, the squaws and children were estimated.  Six badly wounded bucks are here [at Pine Ridge], six wounded bucks with a party of twenty-three bucks and squaws which Captain Jackson had to drop when attacked by the Brules.  Sixty-two dead bucks were counted on the plain where the fight commenced and on other parts of the ground were eighteen more.  This does not include those killed in ravines where dead bucks were seen but not counted.  …  The squaws and children broke for the hills when the fight commenced and comparatively few of them were hurt and few brought in.”  Brooke goes on in this account, but it seems clear that his estimates of the number of women and children killed were much lower than the actual numbers.  There are many more telegrams exchanged over the course of the next few days, with more captures of Lakota reported.

Brooke justifies Wounded Knee in a document dated April 6, 1892:  “The horrors of Indian wars are not understood by such people and the atrocious deeds of a ‘war party’ are evidently forgotten when the fight at Wounded Knee is spoken of as a ‘murder.’  It is true that all such encounters are due to the mistaken policy which has been pursued and which has caused the Indians to distrust the sincerity of the white man.”

The correspondence in the Brooke papers details much of the aftermath of Wounded Knee, and follows Brooke’s military career as he helped to craft policy in the Department of the Platte, as well as Puerto Rico and Cuba.  I hope that with the improved description of this collection, these papers will offer another perspective on U.S. military policy during the Indian Wars and the campaigns that followed.

This week, I am working on finishing up the John Rutter Brooke Papers, the first collection I am processing as part of the Digital Center for Americana. 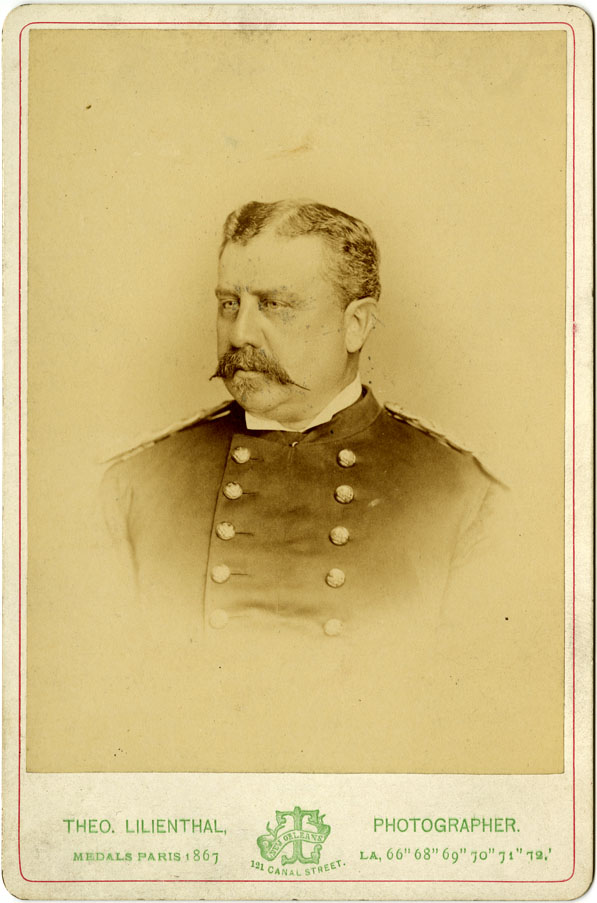 The collections that are part of the project were chosen because of their Civil War-related content, so imagine my surprise when I realized that the Brooke collection has much more to do with the US Army’s “Sioux Campaign” in 1890-1891, which culminated in the slaughter of many hundreds of Lakota Sioux men, women and children at Wounded Knee.  Brooke also sat at the helm of the military takeover of Puerto Rico and Cuba in 1898-1899.   I spent more time than I should have reading through some of the letters about the military movements and directives leading up to Wounded Knee, but I couldn’t help myself.  Knowing the outcome of the situation already, I read these letters with a pounding heart as the communications increased between December 26th and  29th. 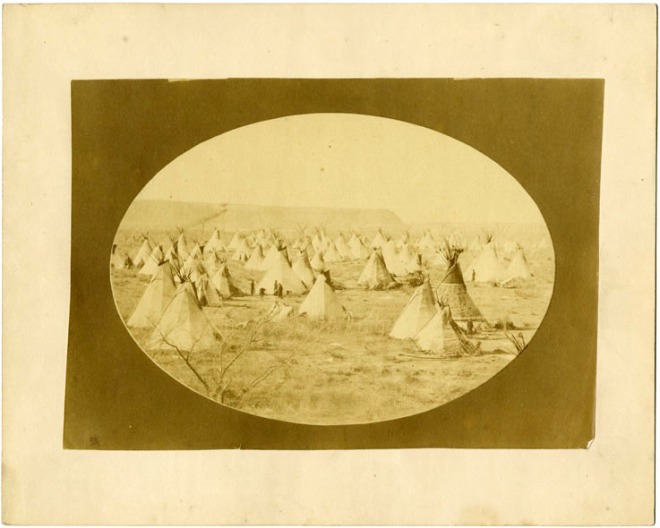 When I am working with material dealing with the nastiest chapters of our nation’s history, I am filled with a sense of sadness and heaviness as my worst feelings about the historical legacy of the United States are confirmed before my eyes.  I felt this in my last processing project, when I was reading through papers dealing with the Chew family’s plantations and the enslaved people who suffered without assurance of adequate food or clothing or the prospect of freedom.

I struggled to maintain a sense of objectivity about the people who created this record of history.  I wondered how to give a voice to those people whose voices were silenced through their enslavement.  I tried to give their names when I knew them, so that their stories could be uncovered by researchers and ancestors.  I feel this same sense of struggle when reading about Wounded Knee.  How can the real stories of these events be told?  My instinct directs me to contact indigenous groups who are documenting their own history so that they know about these papers and can use them to tell the story of their people.

As an archivist, I know my job is not to tell my version of history, however true and real it may feel to me.  I know that my sympathies lie with the people whose voices have rarely been heard in history texts, yet my job is to present descriptions of materials without bias (as much as that is possible for anyone).  These issues were brought to the forefront of my mind at the Chew event on October 14th, which was billed as a celebration of the end of the project.

I wanted to educate the event’s attendees about how many topical areas are covered in the collection, how rich the material is, and how much it can offer to scholars and researchers.  This “celebration” turned into a contentious discussion during the Q&A (read Matthew’s post for a more detailed perspective on the evening), but it got me thinking a lot about the view we bring to our work, and the language we use to describe what we have in front of us.  It matters–all of our biases and personal views and resistances are there in the way we choose words, the way we focus our attention, and the ways we are willing (or not) to engage in debate about these issues.  The fact that these issues are in the forefront of my mind now is extremely valuable, especially as I begin to describe another collection filled with painful, and potentially volatile, material.

We have much to heal in this country–prejudices related to ethnicity, gender, sexuality, age, disability, and many other things do divide us.   These collections offer us an opportunity to work toward healing these divisions by giving the power of interpretation back to the public, and offering groups whose history has been erased or covered over the chance to reclaim some of their story.  While I bear a heavy burden when it comes to the choices I make in description, by making the papers accessible and available to researchers, their voices eventually become the conversation and my voice becomes more of a background hum that tells you where to find that paper with a date and name.  I do my best to provide access points and hope that groundbreaking and thoughtful histories come next.